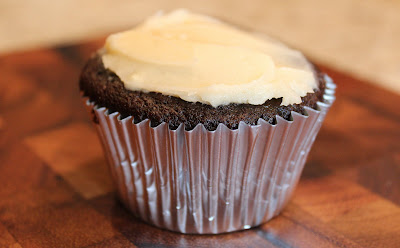 One of my favorite bloggers, Brown Eyed Baker blogged a recipe for Irish Car Bomb Cupcakes last year and I immediately saved it to my favorites. The idea of using beer in a cake was interesting, and the addition of sour cream seemed like a nice alternative to making my ultra-moist buttermilk-based cake...I always seemed to buy a giant container of buttermilk  for that cake recipe and end up with a lot left over.

So, this St. Patty's Day, I decided to give the recipe a try. However Chris and I aren't ones to keep Irish Whiskey or Irish Cream in the house. And frankly, I'm too cheap to drop a bunch of money on alcohol we won't drink. So, I adapted the recipe to make "plain" Guinness Cupcakes with a vanilla buttercream frosting. Trust me, these are rich little cakes of goodness too.

The addition of Guinness to the cake has a similar effect as adding coffee or espresso. It just brings out the natural chocolate flavors that are already going on. Sour cream in the cake gives the cupcakes a really nice moistness.

As far as the frosting goes, a vanilla buttercream works really well here, but honestly, if you have some Bailey's around there's no reason NOT to whip some into the frosting instead of the vanilla!

In all honesty, these cupcakes turned out marvelously well, and certainly shouldn't be limited to St. Patty's Day!

Okay - these looked SO tasty when they were assembled that my husband and I inhaled the sandwiches before I had a chance to take a photo! So, no photo for this blog update. The source of my inspiration for this super quick dinner is Penn Station. For those of you who are unfamiliar, Penn Station is a quick serve restaurant where you order your sandwich and they make it in front of you on their hibachi-like grill. They saute up all the ingredients, throw on some cheese, toss it in a french bread, and throw it through a broiler to get it all melty and gooey. My favorite sandwich has always been the Chicken Teriyaki Sandwich with mushrooms and onions however recent years it hasn't been living up to my standard. So, I set out on a quest to make it the way I remembered. Plus, there aren't any Penn Stations here in Madison! The recipe below I believe will be super flexible for you. Add as many or as few mushrooms, onions and green peppers as you like. Season with as much (or as litt 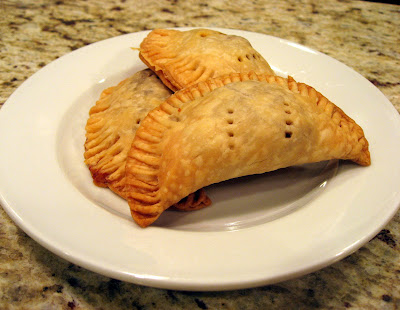 I like making pot roast because I use the slow cooker, I can throw everything in, set it and forget it. But, Chris and I don't usually eat the entire pot roast in one night. The left overs will last us a couple of days. But, eating pot roast leftovers for more than a day is not usually something we end up doing...so, I decided to do something a bit different this last time, turning them into my version of beef empanadas. The results were good! I served with salsa and spanish rice on the side. If I make them again, I will use a bit more taco seasoning to make them spicier. You can change up the spice level, moisture levels, cheese, and size easily. The ingriedients below yielded about 6 empanadas with leftover spicy beef mix. These will freeze up wonderfully. Just prep them all the way to step 3 and freeze on a cookie sheet before moving to a ziploc bag. Ingredients for roughly 6 empanadas: 1 cup left over beef pot roast 1 Tbs taco seasoning 2 Tbs water (adjust based on how moi 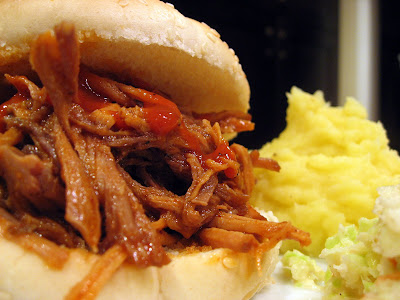 Holy cow. This recipe was good. SO GOOD. Chris doesn't even like pork (with the exception of bacon, of course) and after taking his first bite he proclaims "Holy crap, that's good". He proceeded to eat seconds. Folks, this is a MAJOR indicator of how good this recipe is... So get your butt to a grocery store, buy some pork shoulder and get to slow cookin'. You will not regret this. I love barbecue. I discovered a few years ago, two things...1) there's a phenomenal barbecue place 30 seconds away from my office called Smoky Jon's and 2) that I sometimes want barbecue on the weekends when I'm 30 minutes away from Smoky Jon's, but I'm too lazy to drive to the opposite side of town to fulfill my barbecue craving. Initially, I turned to pulled chicken sandwiches as my solve for barbecue sandwiches at home. It's good, but not the same. Once, I tried pulled pork using a pork tenderloin and the same method I use when making pulled chicken (p